Share a memory
Obituary & Services
Tribute Wall
Read more about the life story of Debbie Kay and share your memory.

Debbie Kay Born Kalakay was born on September 12, 1954 in Omaha, Nebraska to Raymond and Betty Born. Debbie and her two siblings, Raymond and Randy, moved with the family to Idaho Falls in 1957 when her father was hired to work at the AEC site west of Idaho Falls. The family increased in size in 1970 when Betty and Ray adopted the three children, (Buffy, Rob, and Brian) of close friends who died unexpectedly three years prior.

Debbie graduated from Bonneville High School in 1972. Following graduation, she was briefly married to Randal Christesen and relocated to Arizona. During this time her son, Steve, was born, in 1974.

In 1979, she was introduced by a mutual friend to the man with whom she would spend the next forty three years. Debbie married Mark Kalakay on November 25, 1983, creating a family of four with her new daughter, Angie. Together, the Kalakay family never stopped creating memories of their times spent together camping the Yellowstone backcountry, floating and fishing the South Fork of the Snake River, backpacking into Bechler Meadows , skiing local resorts and looking forward to their annual multi-day trips to Grand Targhee.

Beginning in 1980, she managed a Taco Bell restaurant before finding her niche in health care. She worked for many years as a medical assistant to two well-known local physicians. Her true calling was the more than twenty years that she worked at Eastern Idaho Regional Medical Center as a certified phlebotomist. In this profession she exhibited her gift of both exemplary skills and unparalleled compassion. She brought sincere joy to everyone she encountered, be they patients or co-workers. She retired from EIRMC in early 2020, just prior to the arrival of the COVID pandemic.

Debbie was the master of the “Love Hug” … a concept foreign to the Kalakays prior to her entry onto the scene. Over time there was no way to resist and even the Kalakays became a family of huggers. Her compassion extended beyond the human species and it seemed that any needy creature she encountered was likely to find a new home in hers. Debbie was a collector of antiques and spent countless days scouring garage sales and thrift stores with her mother, searching for treasure. Theirs was a special mother / daughter bond that included more than ten years of tap dancing together. Annual trips with her husband to the Yucatan Peninsula of Mexico became another one of her passions. Her spread of friendship and joy had gone international. She and Mark were both looking forward to their upcoming trip to visits their long-time friend, Luciano, who is finishing construction of his new home in Colombia and insists that one of the new rooms is theirs. Following her retirement, Debbie became the finest guide, spotter, chauffer, photo critic and early morning companion as she and Mark traveled the back-roads of Idaho on their weekly wildlife photography adventures.

Debbie left this world on December 26, 2022 while recovering from the treatment of Non-Hodgkin’s Lymphoma. She leaves behind her loving husband, Mark Kalakay of Ririe, Id; son, Steve Christesen of Rigby, Id; daughter, Angie (Ben) Evans of Sandpoint, Id; mother, Betty Born of Idaho Falls, Id; four brothers, one sister, and seven grandchildren. She was preceded in death by her father, Raymond Born and sister in law, Junie Born.

Debbie left her influence on everyone she encountered. If we all lived and loved as Debbie did, this world would be a better place. Her wish would be that, in lieu of flowers, you may contribute to the Snake River Animal Shelter in her memory.

To send flowers to the family or plant a tree in memory of Debbie Kay Born Kalakay, please visit our floral store. 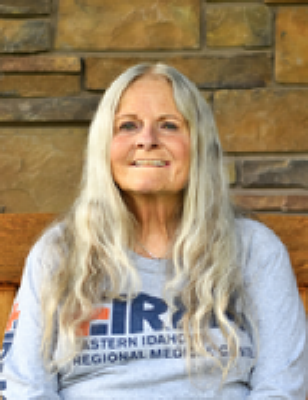